If you are on a vacation in Panama, and you stay in or around Buenaventura, Playa Blanca, Rio Hato, or the Valle de Anton, you may go on a fishing trip or fishing charter starting in Buenaventura Marina.

If you just like to take your travel casting rod, there are also some spots around the beaches, mostly around the river mouth, where you will be able to catch your family’s dinner.

Give us a call or send a Whatsapp message to +507 64948089 and we will be happy to get out on the water catching some fish, no matter if it’s just a relaxed day out at sea with your family and some fishing on the way or the big game fish for Tuna and Marlin on a professional fishing charter boat.

There are various fishing charter boats leaving from Buenaventura Marina that you may choose from.

One of the big advantages of the comfortable sailing catamaran, when you go fishing, is that it has a fully equipped kitchen and a gas barbecue. So you may enjoy your freshly caught fish already on the boat. Depending on the fish that you caught on your trip, we may prepare it for you grilled, as Sushi and Sashimi or Ceviche.

The Bertram is the go to vessel for fishing trips with up to six guests. The professional skipper knows the best fishing spots and has the equipment to make you catch.

When to go fishing in Panama?

Fishing in Panama is generally very good throughout the year. There are however seasonal differences that you may want to take into account when you plan your fishing trip to Panama.

The weather for fishing trips in Panama. We only have two seasons here: Summer and rainy season.

The summer is very dry and there is a steady north-easterly trade wind breeze coming over the Isthmus. Summer starts in December and ends in April and in peak summer months (January to March), it does not rain at all. In contrast to common belief, summer is actually a bit cooler than the rainy season as you’ve got a nice, refreshing breeze and it is less humid. Usually, summer makes a comeback in August and September as the “Veranito” (small summer), with winds from the south east. This, however, is less predictable. Bring a lot of sunscreens, a hat, and long sleeve shirts for your fishing trip as the sun gets very strong here.

The rainy season starts in May with peaks in June and October. Depending on where you are in Panama, it usually rains in the afternoon and sometimes it’s even cloudy for a couple of days in a row. Bring your raincoat. It is still nice and warm. (27 – 29 C or 81 to 84 F)

Panama Fishing Calendar by the Month

January is a great season for fishing as it’s dry and breezy and the Humboldt current starts making its way further up north into the bay of Panama. With a slightly fresher water temperature, a lot of fish come into the bay, including Yellow Fin Tuna.

In February and March, also Dorados (Mahi Mahi) are all over. We love Dorados for their special, white and tasty meat.

April and May are transitory months. There is less wind and we like to go out to Islands like Otoque to also cast a bit.

Where to go on a fishing trip in Panama in the Bay of Panama?

There are great fishing spots around the Pacific Coast of Panama. Some of them are accessible from Buenaventura Marina in Rio Hato, next to Playa Blanca.

Depending on the vessel and duration of the trip, you may explore fishing spots in a disctance of up to 50 miles on a daytrip. 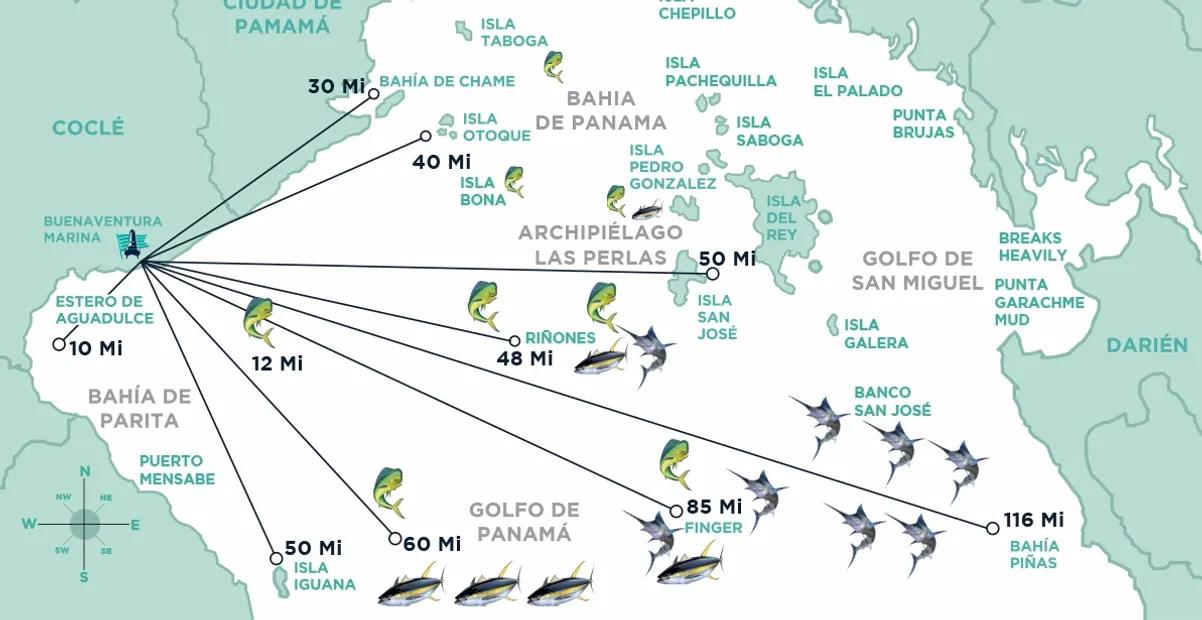 We love Spanish Mackerels for their tasty meat on the barbecue.

And we probably don’t have to tell you that Yellowfin Tuna makes awesome Sashimi and Sushi, especially when it’s that fresh..

If you go with Sailing Catamaran Outventure on a fishing trip, we may even prepare the fish for you while still out at sea. Usually, we make a stop at Isla Farallon on the way back and put the fresh catch directly on the barbecue. 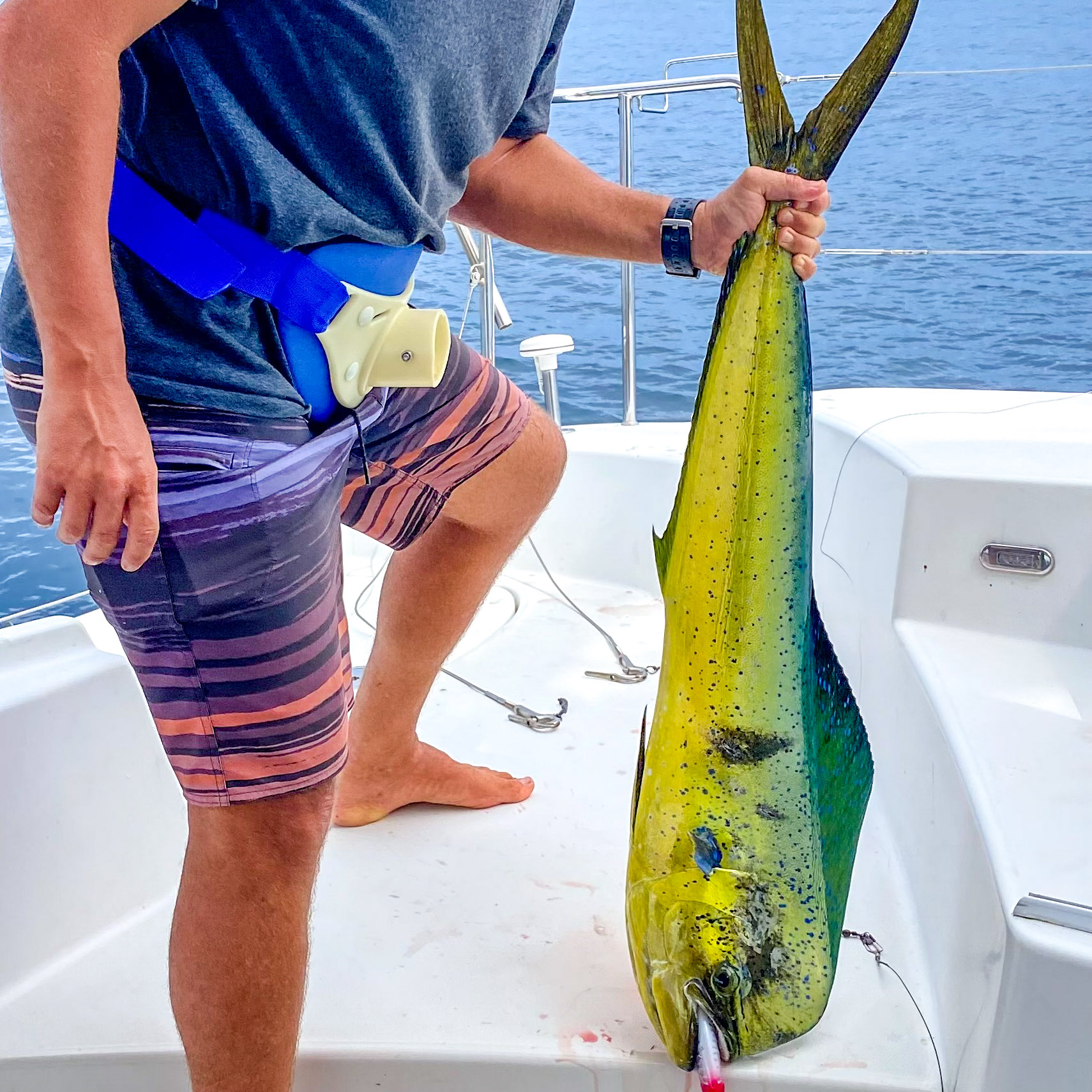 If you just like to go fishing in Buenaventura or Playa Blanca casting a rod from the beach, there are a couple of river mouths along the beaches of Playa Blanca. Rio Hato and Rio Farallon have plenty of fish and the best is to go there slightly after high tide when the water is leaving the river into the sea and the fish will pass by your lures. You will catch Red and Yellow Snapper (Pargo), Sea Bass (Robalo) and Blue Runners (Cojinoa). All of which are great fish to eat with tasty white meat.

On a holiday in Playa Blanca or Buenaventura in Rio Hato in Panama?

You are coming to Playa Blanca, Rio Hato, Bijao, Decameron, or Buenaventura for a holiday? Don’t miss going on a catamaran sailing tour leaving from Buenaventura Marina in Rio Hato in Panama.

On a holiday in Playa Blanca or Buenaventura in Rio Hato in Panama?

You are coming to Playa Blanca, Rio Hato, Bijao, Decameron, or Buenaventura for a holiday? Don’t miss going on a catamaran sailing tour leaving from Buenaventura Marina in Rio Hato in Panama.